Getting ready to rocket 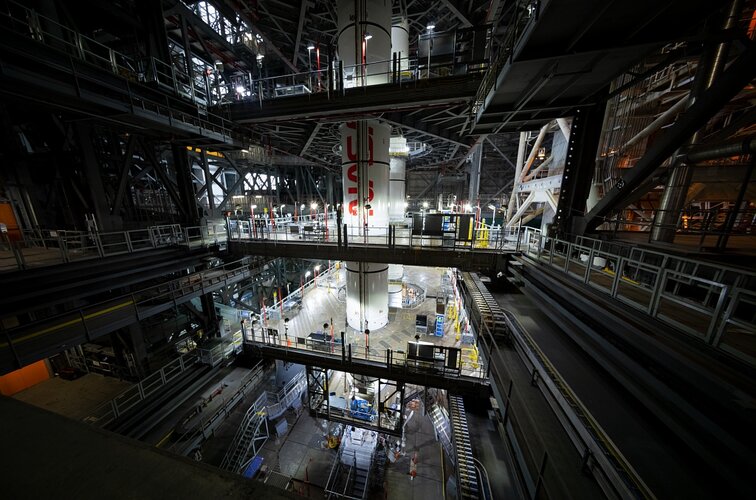 The pieces are stacking up for the launch of Artemis 1 mission around the Moon and back. The massive Space Launch Systems (SLS) rocket that will launch the first crewless test flight of the Orion spacecraft, powered by the European Service Module, is being integrated at the Vehicle Assemble Building at NASA’s Kennedy Space Center in Florida, USA.

Visible in this image are the twin solid fuel rocket boosters, now fully stacked atop the mobile launcher. The boosters will be mated with the rocket’s 65 m tall core stage that recently barged in to Florida aboard the Pegasus barge on 27 April after successful testing at NASA’s Stennis Space Center in Mississippi.

Once the rocket stages are ready to go, the Orion spacecraft and additional flight hardware are next up for integration.

Since our last Orion and the European Service Module update for Artemis I, the spacecraft has moved, from the NASA Kennedy Space Center’s Neil Armstrong Operations and Checkout facility, a few kilometres down the road to the Multi Payload Processing Facility. The names of these buildings give the game away. The first Orion spacecraft has been checked out and is ready for the next step on the road to space: processing for launch.

Fuelling was completed on 1 April, after which the system will be serviced in high pressure helium that serves as a pressurisation agent to the European Service Module propellant tanks, ensuring the correct pressure at the engine inlets.

Eventually, the spacecraft will be hoisted to the top of the fully stacked SLS rocket.

The European Service Module is ESA’s contribution to NASA’s Orion spacecraft that will send astronauts, including the first European, to the Moon and beyond. Follow Europe’s role in the mission here.