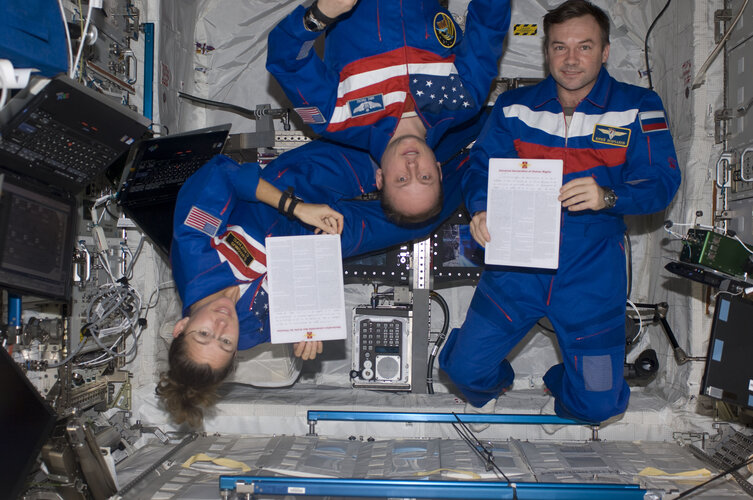 In this image taken in 2008, Expedition 18 crewmembers Sandra Magnus, Mike Fincke and Yury Lonchakov display the Universal Declaration of Human Rights inside the European Columbus laboratory of the International Space Station. This year, as the Station celebrates 20 years of operation, both serve as a reminder of humankind’s ability to come together for a common cause.

The documents were carried into space on Space Shuttle Endeavour on 15 November 2008 as part of a year-long calendar of celebrations to mark 60 years since the Declaration was first adopted by the United Nations General Assembly at the Palais de Chaillot in Paris, France. They are permanently stored in the European Columbus module, which was installed just months earlier, in February 2008.

Today marks 20 years since the first crew took up residence on the International Space Station. Since then, 240 people including 18 ESA astronauts have lived and worked on the orbital outpost, carrying out essential research to benefit life on Earth.

The now football field-sized feat of engineering started off with just three modules: the Russian Zarya cargo and Zvezda service modules and the US Unity module. It took 42 assembly flights for all the large modules and other pieces of the Station to be delivered – 37 were delivered on NASA space shuttles and five on Russian Proton/Soyuz rockets.

The European laboratory, Columbus, was launched to the Station in 2008 and the European-built Cupola window providing the 360-degree views of Earth that we know and love today was added in 2010.

The Space Station orbits Earth at around 27 580 km/h, meaning astronauts living and working on board experience 16 sunrises and 16 sunsets every 24 hours. It has hosted over 26 European missions and supported over 2700 international experiments to improve life on Earth and in space.

Follow along as we highlight the life and science of the International space Station over the past 20 years by following the hashtag #SpaceStation20th.