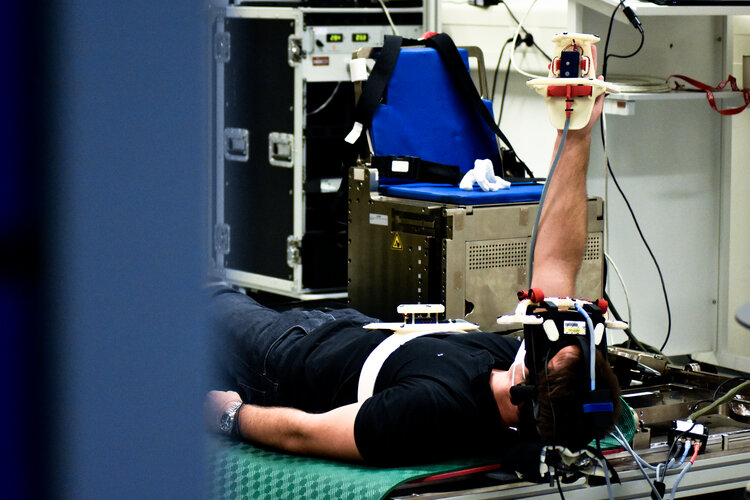 French ESA astronaut Thomas Pesquet re-familiarises himself with the Grasp experiment at the European Astronaut Centre in Cologne, Germany. Thomas will continue running this experiment during his second mission on board the International Space Station.

Thomas commissioned the Grasp or Gravitational References for Sensimotor Performance experiment during his first mission to the Space Station, called Proxima, in 2017.

The experiment tests how the brain interprets visual cues without gravity. Using a VR headset, the subject must complete a series of tasks like catching a ball or pouring a glass of water. The astronaut subject is held in place by straps to avoid bumping into expensive or critical equipment while performing the experiment.

“It was a bit disconcerting,” Thomas noted of the first time he performed the experiment on the Space Station, “but very fun to be in the Space Station which is already out-of-this-world while also being in another (virtual) reality.”

Watch a timelapse of Thomas setting up and performing the experiment in weightlessness here.

Thomas will perform this experiment again during his second mission, called Alpha, scheduled for launch in spring 2021. Read more about mission Alpha and the first European to travel to the Space Station on a SpaceX Crew Dragon here.

Astronaut training is more than just space suit-ups and spacewalk simulations in a big pool. They must also become familiar with experiment hardware and laboratory equipment they will use while performing scientific experiments on board the International Space Station.