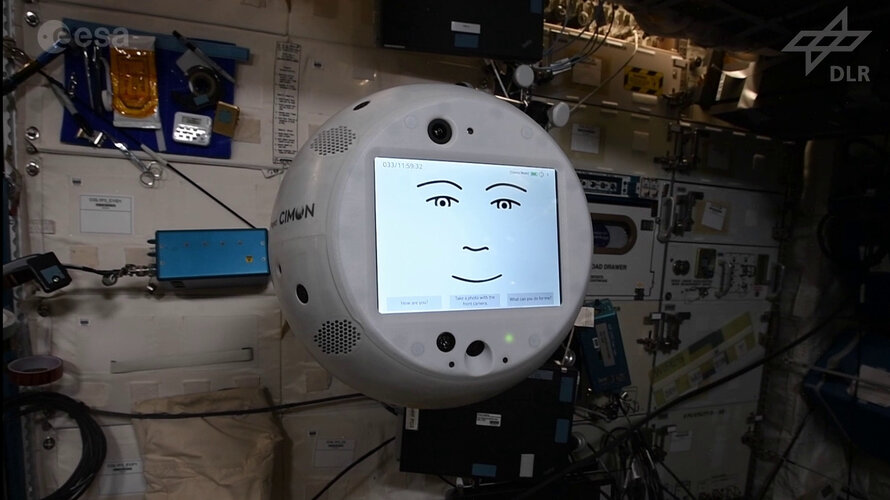 ESA astronaut Luca Parmitano tested new functionality for the astronaut aid Cimon relating to mood detection and enjoyed a few favourite songs on the first weekend of February 2020, his last weekend in space for the Beyond mission on the International Space Station.

Short for Crew Interactive Mobile CompanioN, Cimon is a 3D-printed plastic sphere designed to test human-machine interaction in space. It was developed and built by Airbus in Friedrichshafen and Bremen, Germany, on behalf of German aerospace centre DLR and uses artificial intelligence software by IBM Watson. Ludwig Maximilians University Clinic in Munich (LMU) is in charge of the project’s scientific aspects. Cimon was first used by ESA astronaut Alexander Gerst during his 2018 Horizons.

Cimon weighs around 5 kg on Earth and has a display screen at its centre. Its main aim is to support and increase astronaut efficiency by displaying and explaining information needed to carry out scientific experiments and repairs.

Other applications include mobile photography and videography and the ability to document experiments, search for objects and maintain an inventory. Cimon can also see, hear and understand what it observes and is equipped with an autonomous navigation system, allowing astronauts to issue voice commands like you would to virtual assistants like Alexa, Siri or Cortana on the ground.

Circling our planet at 28 800 km/h the International Space Station offers space for six astronauts to conduct experiments for researchers all over the world in weightlessness as well as test and demonstrate techniques needed to further explore our Solar System.

Europe’s laboratory Columbus was launched over 10 years ago and more than 200 experiments have been done inside. Columbus houses as many disciplines as possible in a small volume, from astrobiology to solar science through metallurgy and psychology. Countless papers have been published drawing conclusions from experiments performed in Columbus, and Cimon is another example of the research conducted in space.